Hello Yew Class and welcome to our reading for this term!

There are lots of amazing books set in WW2 so have a look at the list on the main Reading page if this is something that interests you too. There's also a list of websites that have lots of non-fiction information about WW2 and a list of WW2 poems you can read. I'll add to these as I find and remember more!

We're going to read the children's classic Carrie's War together until we return to school. So that we can all follow along, we are going to listen to the audio book bit by bit each week. The novel is set in WW2 and written by Nina Bawden. 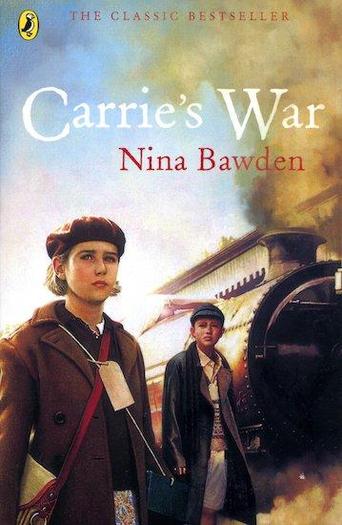 This is the blurb:

Nick was frightened of ogres and spiders and crabs and cold water and the dentist and dark nights, but he wasn’t afraid of Mr Evans, even after that first dreadful night, because Mr Evans had false teeth that clicked when he talked.

Bombs are falling on London when Carrie and Nick are sent away. Wartime evacuees billeted in Wales, they stay with bullying old Mr Evans and his timid mouse of a sister. Their friend Albert is luckier, living in Druid’s Bottom with Hepzibah Green and the strange Mr Johnny. But the old house is tainted by the Screaming Skull’s ancient curse. When Carrie does a terrible thing, will it haunt them all forever? This timeless story of two evacuees transported to rural Wales brilliantly evokes the Second World War era.

1) Listen to this week's episode: https://www.bbc.co.uk/teach/school-radio/english-ks1--ks2-episode1-carries-war/zm77gwx

2) Draw a picture of the Welsh town the children arrive in. Think about what the children would be able to see: in the distance, close by, people in the picture, the weather. You might want to note down ideas while you listen to the episode.

Challenge: Draw Carrie, Nick and Albert. What do you think each character is like based on what we've listened to?